Fertilization value of early red clover (Trifolium pratense L.),Washington lupin (Lupinus polyphyllus Lind) and crimson clover (Trifolium incarnatum L.) as green manure crops
Bender, A.
In 2008–2011, field trials were carried out at the Jõgeva Plant Breeding Institute in order to identify the possibilities of using the early red clover cultivar ‘Jõgeva 433’, Washington lupin with Jõgeva breeding number 4 and crimson clover of Italian origin as green manure. The fertilization value of the above species was studied after autumn ploughing in the year of sowing and on the second year from sowing, based on the yield and grain quality of spring wheat ‘Vinjett’ and barley ‘Inari’. The in-ploughed biomass as well as its composition were recorded. By the time of ploughing Washington lupin has produced the most abundant biomass. Of the studied species crimson clover had the lowest fertilization value, the stubble and roots of seed plants that were ploughed in resulted only in 6–7% of extra yield of spring wheat in the following year. Crimson clover had no fertilizing aftereffect in the second year. The fertilization values of red clover and Washington lupin were more or less equal. Their statistically significant positive effect on the increase of yield of spring wheat and barley lasted for 3 years, on the quality of grain for 2 years. Red clover that was ploughed into the ground in the year of sowing gave the maximum extra yield of 27% in spring wheat comparedwith o N 0 variant, and Washington lupin 23%, respectively. In the second year of aftereffect Washington lupin gave in barley an extra yield of 26.8%, red clover 10.1%, and in the third year 10.4 and 12.1%, respectively. Green manure increased the contents of crude protein and gluten in spring wheat and that of crude protein in barley.
The fertilization value of all studied species was higher in the case they were sown without a cover crop.
Keywords:Trifolium pratense L., Lupinus polyphyllus Lind., Trifolium incarnatum L., green manure, spring wheat, barley, yield, quality
Source: Agraarteadus 2012 (23) 1:3-11

"Year 2014 soil" − the leached soil
R. Kõlli, I. Tamm
By Estonian Soil Sciences Society for the year 2014 soil the leached soils as one of the best arable soils of Estonia was elected. After WRB these soils embrace mainly Haplic & Endogleyic Cambisols (calcaric, endoskeletic). The area of leached soils forms 7.7% from whole Estonian soil cover or a little bit more than 3250 km2. In overview on Estonian year 2014 soil the morphology, genesis, classification, humus status and different properties (chemical, physical, hydro-physical) are treated on detail level of Estonian Soil Classification, for which are soil species (identified by soil genesis) and soil varieties (divided on the basis of soil texture). Besides abovementioned characteristics the productivity, environment protection ability in dependence upon soil functioning and properties, usage in agriculture and forestry, and distribution in Estonia of leached soils is analysed.
Keywords: leached soils, year 2014 soil, cambisols, soil properties
Source: Agraarteadus 2014 (25) 1:30-38

The selenium status of dairy cows in Estonia
Ling, K., Ilves, A., Jaakson, H., Olt, A., Ots, M.
Based on earlier soil, forage and animal studies, Estonia is considered a Se-deficient country where Se supplementation of dairy cows has been routine practice for more than 10 years. To evaluate the current Se status of Estonian dairy cows, bulk tank milk samples (n = 218) from farms (n = 110) producing over 60% of the milk purchased in the counties of Estonia, were analysed for the Se concentration. Milk Se content ranged from 5 – 34 μg/kg. The mean Se content of all the samples was 16 μg/kg, indicating dairy cows’ Se status was from high-marginal to adequate depending on the reference level used. The results of the study provide evidence that the Se status of dairy cattle in Estonia has improved. Although Se status was satisfactory on 99 farms (90.8%) there were 10 farms (9.2%) with a milk Se concentration of less than or equal to 10 μg/kg where attention should be given to Se supplementation of the animals.
Key-words: bulk milk, trace elements, silage, nutrient deficiency
Source: Agraarteadus 2013 (24) 1:15-20

Summary of trial results of reed canarygrass (Phalaris arundinacea L.) seed production that were conducted at Jõgeva
Bender, A.
Reed canarygrass (Phalaris arundinacea L.) is a naturally widespread grass in Estonia, which so far has successfully been used as a dominant species in the stands of cultural meadows on reclaimed alluvial and peat soils. Because of high and stable dry matter yield through years, in the past decades the species has been started to be used in addition to fodder production also as raw material for cellulose and energy pro-duction. Compared to other grasses, reed canarygrass is characterized by a moderate and unstable seed yield. In the years 2008–2013 a number of experiments was conducted at the Jõgeva Plant Breeding Institute in order to investigate the effect of seeding rate (4, 6, 8, 10 kg ha-1), row spacing (15, 30, 45, 60 cm), nitrogen fertilizer rate (N 70, 105, 140 kg ha-1) and cutting time of stubble hay (July, October, April) on the seed yield of reed canarygrass. The trial results indicated that when the seed field was established with narrow spacing (15 cm), seeding rate of 4–6 kg ha-1 and nitrogen was applied at the rate of N 140 kg ha-1, the reed canarygrass "Pedja" yielded in the first two years of use up to 430 kg of seed per hectare. In the following years of use the seed yield dropped drastically. It was expedient to cut the stubble hay at the end of the vegetation period (October) or even next spring (April). Besides the seed yield, it was possible to harvest from the trials 5–8 t ha-1 of dry matter the energetic value of which was 140 GJ. The moisture content of straw harvested in July was 14.5–20.3%, of stubble hay harvested in April 14.3–15.2%. The straw of reed canarygrass as well as the stubble hay harvested in April can be used as energy hay, the sales revenue of which made 12% of the total estimated sales revenue.
Keywords: reed canarygrass, seeding rate, row spacing, nitrogen fertilizer, harvest time of stubble hay, seed yield, biofuel
Source: Agraarteadus 2014 (25) 1:3-16

Mycotoxin contamination in grass and maize silage in Estonia
H. Kaldmäe, A. Olt, R. Leming, M. Ots
The silage quality estimated by chemical composition and fermentation parameters, but awareness of the composition of mycotoxins is of great importance. The aim of this study was to determine the concentration of the mycotoxins (deoxinivalenol (DON) and zearalenon (ZEA)) in silage produced on Estonian farms (n=56), in the years 2011, 2012 and 2013. A total of 596 grass, 55 maize and 10 whole-crop silage samples were collected for analyses. The silages were found to contain mycotoxins. In grass silage, 92% of samples were found to be positive for DON and 100% for ZEA, while in maize silage samples 95.7% were positive for DON and 100% for ZEA in 2013. The mean concentration of DON of grass silage was 209 ppb while the concentration of ZEA was 329 ppb. In maize silage the mean concentrations of DON and ZEA were 227 ppb and 292 ppb respectively. ZEA concentration in first-cut grass silage was a mean of 257.4 ppb, the second cut 245.0 ppb and the third cut 224.4 ppb, while the figures for DON concentrations were 214.7 ppb, 190.8 ppb and 166.3 ppb respectively. Silage with a dry matter content of <25% contained fewer of the analysed mycotoxins compared to silages with dry matters of 35–45%. During the growing period grass forage was contaminated with mycotoxins, most of all by DON and ZEA. Mycotoxin concentrations increased in the field before the forage was cut for silage making. The ZEA and DON concentrations increased by with increased growth time of the forage. The maximum levels of mycotoxin contents of the grass were recorded at the time of harvest. DON and ZEA concentrations in the summer period depended on the grass species and the weather conditions.
Keywords: grass silage, maize silage, deoxynivalenol, zearalenone, mycotoxins
Source: Agraarteadus 2014 (25) 1:23-29 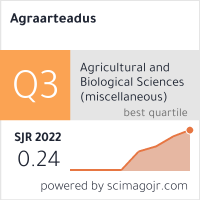